M.L. Rowland’s Murder on the Horizon, the third in the breakout series of Search and Rescue mysteries, releases August 4, 2015. The series is published by Penguin Publishing Group under its Berkeley Prime Crime label.

Murder on the Horizon returns readers to Timber Creek, where the hot, dry Santa Ana winds are blowing. But more than just the threat of wildfire endangers the tiny mountain community… 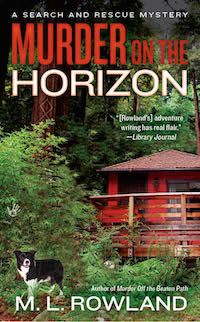 Gracie and her Search and Rescue teammates are searching along the highway in the middle of the blisteringly hot Mojave Desert when they make a grisly discovery—a trash bag containing human body parts. Not long after, Gracie’s growing friendship with a ten-year-old runaway draws her unwittingly into the secretive, hate-filled world of the boy’s family—a group of gun-toting extremists. As a wildfire roars into Timber Creek, Gracie finds herself caught up in an explosive plot that, unless she stops it, will destroy countless innocent lives.

For a dozen years, Rowland served as an active member of a busy mountain Search and Rescue team in southern California, participating in hundreds of missions and trainings. Many of the area descriptions, incidents and Search and Rescue protocol and procedures are based on her experiences on the team.

Rowland’s first two books in the series, Zero-Degree Murder and Murder off the Beaten Path, were both released in 2014 to excellent reviews. Of Zero-Degree Murder, Library Journal wrote: “This exciting, seriously good adventure debut deserves a place in your book carts. With her spunky female leading the way, Rowland dishes out generous portions of adrenaline rush. …Her adventure writing style has real flair.”

About the author:
Born, raised and, except for one year of high school in Hawaii, schooled kindergarten through college in Michigan, Rowland comes by her adventurous spirit honestly. Her mother was Grand Rapids, Michigan’s first woman city commissioner. Her father—a neurosurgeon and marine scientist—was a world traveler and member of The Explorer’s Club. After college, Rowland lived and worked in Florida, Missouri, Connecticut and New York City, finally settling in the mountains of southern California where she and her husband, Mark, joined the local Search and Rescue (SAR) team.

During her twelve years on Search and Rescue, Rowland participated in hundreds of search and rescue missions and trainings, including technical ropes rescues and recoveries, helicopter insertions and evacuations, and searches for lost children, hikers, snowboarders, mountain bikers and criminal evidence, in alpine, desert and urban environments. She served as the team’s Training Officer and participated in community events and public speaking engagements. Trained in land navigation, and desert and winter survival, including avalanche awareness and self-arrest, she also holds a certification in tracking from the State of California. Much of what she writes about in her Gracie Kinkaid Search and Rescue Mystery Series is drawn from her and her husband’s SAR experiences.

Rowland is an avid political activist, naturalist and environmentalist. She’s an accomplished painter and loves to snorkel. Topping her bucket list: snorkeling with whale sharks. She has traveled to all fifty United States and throughout the world, including Kenya, New Zealand, the South Pacific and Europe. As often as possible, she hikes and explores the slot canyons of Utah.

Rowland lives with her family at the foot of the Sangre de Cristo Mountains in south-central Colorado. Visit her at www.mlrowland.com.